Ii have been a Met fan since their beginning, fed up that the Dodgers left. But now, I have become a reluctant Met fan. I was very optimistic about their chances but as most fans know, injuries took their toll this year. But for the life of me, I cannot figure any of the moves made by the manager, the general manager and the owner. I cannot watch a game any more. There is absolutely no instinct for the game on the part of any of them. The players have problems but good coaches, which they have NOT, could improve things tremendously. As an old Brooklyn Dodger fan since childhood, I never questioned Leo Durocher’s moves, even when he went to the Giants. I never second guessed Gil Hodges. He knew the game and could sense things. But this group stinks. Lindor is an overpaid joke.. Rosario was getting better every day. Baez is a hacker that will swing at anything that moves and statistically, he hits it occasionally. Talk that he would go to 2B when Lindor returns is a disaster. MacNeil is a natural 300 hitter and great fielder. I could go on but it’s useless. None of them have any feel for the game, the players and the situations. I know management will blame their failure on injuries and the players and probably  trade the good ones. But nothing will change.  Any knowledgable teenager could do better than these guys.

Afghanistan – Ill-conceived from the start

Our original purpose 20 years ago was to stop al qaeda from further intrusions into our country to do damage.  We found and killed Osama bin Laden.  We stopped al quaeda.  A small force on the Afghan-Pakistan border would have done the job.  We didn’t need to spend billions building an army for the Afghanis.  They wouldh’t use it properly anyway.  We knew that.  It was a bonanza for the arms merchants and money in the bank for the rulers.  Getting out was the right thing.  Afghanistan is not our responsibility.  And certainly not if they themselves don’t care.  It’s a travesty that after billions of dollars spent on them, the Afghan army couldn’t even hold on for enough time for us to get out reasonably.

Manchin (and his ilk) are Irresponsible, Bordering on Treason

The only way to stop republicans from destroying our democracy is federal legislation to stop the voter suppresion and legislative control over counting the votes and certifying the winner.  It needs a break in the filibuster.  Manchin and a few other democrats seem to care more about anything but their country. I am disgusted.  If I were Shumer, I would tell him that we will campaign against him even if it means giving up the majority.  He votes as a republican anyway so what’s the difference?

As a lifelong stutterer, I have decided to write a tome (Tentative title above) about it aimed at helping parents to do the right thing with their toddlers and pre-schoolers.  They are not stutterers yet and shouldn’t become one. The book will cover what I know about the subject after years of suffering with it and helping my son grow up without it.

The Most Dangerous McConnell

There is no question in my mind that Mitch McConnell is the most dangerous  man in this country. Even more dangerous than Trump. Witihout him, there is no Trump.  He is bent on his own power, devil take the country.  And the fact that Joe Manchin doesn’t realize it is a tribute to his stupidity.

How do I say goodbye to Leo, the 4 year old pit bull we rescued only 6 months ago. How do I say goodbye to a beautiful, majestic, affectionate, animal who Annie and I have become so attached to in such a short time. Leo has a large tumor, an aggressive cancer, predominately in his shoulder. The doctors can do nothing for him and the prognosis is such that we have no choice but to euthanize hm tomorrow. This muscular, athletic beast can no longer walk normally, limps in pain and stops to lay down every several steps. Yet he manages to walk into the dining room and sit under our dinner table every night. Tonight is his last night and I don’t know how to say goodbye. I wish I could know if he realizes how much we love him and will miss him. Goodbye, my friend. Rest in peace, free of pain. 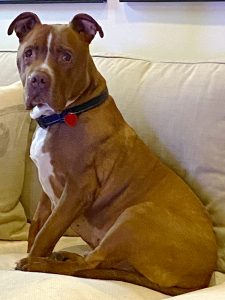 It’s clear to me that the only real solution to our uncivilized behaviou is to repeal the “sacred” 2nd amendment to the constitution and take away the guns.  Eveything else is really bullshit.  The 2nd amendment is an anachronism and no longer has any purpose except to pepetuate giving tools of death to lunatics.

How long do we have to listen to District Attorneys’ absurd defenses of policemen that don’t know WTF they are doing and kill black men “in self-defense?” I was never threatened by a car driving away. But, he says, the car was a threat to the public.  So in the interest of safety, the police shot the driver of the moving car.  Very clever! The State or even the US Attorney General should intervene in all these cases. Local district attorneys have a conflict of interest and almost always support their decisions with publicly stated bullshit that they expect us to believe.

I wanted to check the opening of my book Moffett’s Wife and I got hooked by my own book. I hardly remembered writing the thing. I think it’s a potential movie so I’m trying to decide whether to write a screenplay.

Having lived through the vicious anti-communist fifties culminating in the era of a drunken senator Joe McCarthy, enhanced by a homophobic gay lawyer named Roy Cohn, I never thought our democracy was in jeopardy. In college, I lost great professors in 1953 because of McCarthyism. Tragic yes, but it never occurred to me that our government would fail. But today, I believe that we are in real trouble. Pundits say it does no good to call Trumpists stupid. They have to be listened to, talked to, and convinced. I disagree. No matter how educated or brilliant the components of this electorate are, they are either monumentally stupid or just fucked up and are a danger to our very democratic existence. The Trumpist politicians, on the other hand, are just frightened, spineless, self-serving cultists who care about nothing but their jobs and are willing to support a man whose only working muscle is his mouth, the country be damned. I fail to understand why a lying, dumb, ignorant, amoral, psycopathic, sociopathic creep is raised to the level of a Christ. I used to think his death would be a blessing. But now I fear that even in death, he will find his Lazarus and Saul of Tarsus to promulgate Trumpism as a religion with at least the 75 million who voted for him – stupid, cultist, lemmings.